...the regime army breaks in using tanks, and you hit a tank, the other tanker would fire a random shot and retreat because he was aware that there is an ATGM gunner of the FSA and the next target could be his tank.

One of the greatest defining characteristics of the almost 10 year conflict in Syria, in particular since 2012, has been the use of anti-tank guided missiles of various types, mainly those of the eastern bloc but also from US-Saudi supplies of BGM-71D/E TOW to various vetted factions. Other supplies and extensive captures have lead to ATGM being utilised extensively on both sides.

Whilst various opposition actors (and extremists) have made the most publicised use of ATGM, Assad-allied forces have also employed them in likely greater quantities. On the opposition side, one of the most famous ATGM operators is Suhail Muhammad Hamoud, commonly known as Abu TOW (Abu Tao), who is famed for his skill in the use of ATGM, having been trained in their use pre-War. Abu TOW is also known for his opposition to HTS (Hayat Tahrir al Sham) and radical groups in general, even being imprisoned by HTS in 2017. However, he does operate in co-operation with the HTS-led Fateh Mubeen Operations Room in Idlib, and TFSA/SNA factions in North Aleppo. He has operated throughout almost the entire conflict and has used ATGM to hit 130+ targets.

Suhail agreed to an interview around a year ago to explain some aspects of ATGM use, targeting, training, and other battlefield aspects. I hope it is of interest and use to all.

The interview was conducted via the Internet in a written form and I have lightly edited the responses for readability but attempted to maintain the original wording as closely as possible.

How did you first start this and what training did you receive in the army of the regime? Also, what faction did you join?

I am Suheil al-Hamoud (Abu TOW), a former military volunteer, a warrant officer in “the 46th Regiment- Special Forces” in al-Atareb, in the western countryside of Aleppo. Before joining “the 46th Regiment”, I took a year-long course at the “Field Artillery School” in Aleppo, where I trained using the Russian-made Anti-tank guided missiles (ATGM): Malyutka, Konkurs, Kornet, Metis, and Fagot.

I was the top gunner in the Special Forces training before defecting in 27 March, 2012. After defecting, I joined “Syria Revolutionaries Front”, of FSA, which was the biggest faction, then, in my region, Jabal Al-Zawiyah. There were no ATGMs at the beginning of the revolution, or very few of. Hence, I participated as a storming soldier and my first battle was storming and liberating Khan Tuman depots in the southern countryside of Aleppo, where I got my first injury.

Which battles did you participate in?

I participated in most of the battles: Aleppo, the coast, Hama countryside, Idlib, in more than 9000 war hours since I have joined FSA until nowadays.

What are the different ATGM you have fired, and how many?

Five missed hits were due to manufacturing errors: two of them didn’t launch from the base and the other three were launched but fell after 100m. Only one missile missed because the missile wire hit an electric wire which led to the missile falling to the ground.

How do they differ in use, and which is your favourite platform and why? (Kornet, TOW, Konkurs, Fagot, HJ-8, Malytuka etc) Which is the best for people, tanks, structures, or BMP/Trucks?

All the missiles have the same impact as we have seen in the FSA footage destroying Assad's [army] vehicles and burning them. I have destroyed 133 targets, none of them was against infantry because ATGMs don’t fragment [causing shrapnel] like mortar shells or artillery shells. Therefore, I pick a target such as a tank, a BMP, machine-guns with all types [Heavy machine guns and cannons- DShK/KPV/ZU-23 etc], and military bulldozers.

The types differ to each other. I like the most challenging (Malyutka) whose success rate is 35% and the rest [referring to chance of success] is the gunner’s skill. Konkurs, Kornet, and TOW have +90% success rate and the rest is the focus, calmness, and the boldness of the gunner.

When it comes to Target selection- is the priority a K kill (Completely destroyed) on a prestige target, a mobility kill allowing for a follow up shot or just targets of opportunity that appear on the battlefield?

Thank God, all the targets I hit were K-hits. I didn’t have to stop a target by damaging it before hitting it with a second missile.

My priority is the targets affecting my comrades, but often, after hitting the two MiG-23 Military aircraft in Aleppo [Military] Airport, I would rather target tanks because when the [Syrian Arab] Army breaks in using tanks, and you hit a tank, the other tanker would fire a random shot and retreat because he was aware that there is an ATGM gunner of FSA and the next target could be his tank.

Have you used ATGM at night with thermal/night vision optics? Do the factions use drones to find ATGM targets?

I have used night TOW. The only night-base [TOW GLS with night vision optics] given to FSA was for me in the southern countryside of Aleppo (Al-Eis and al-Hader) against the Iranian militias. The night shooting is better than the day one because of the difficulty and the gunner’s focus and patience.

I don’t use drones. I rely only on Ribat and watching the targets in the battlefield.

How long do you stay in one spot after firing an ATGM? Do you have to move fast to avoid return fire?

You must shoot and change your position immediately. The one time I shot [and didn’t change my position] was in the western countryside of Aleppo. Then, Assad’s forces were advancing and there was only one position I can shoot from. I was targeted directly by a Russian aircraft and got my leg injured. That was my seventh injury.

What is your view on how the ATGM use can affect the wider battlefield situation?

ATGM is fundamental in all the battles and one base is enough to stop the advancement of Assad’s forces, at least for days if not at all, because Assad’s forces advance under the artillery fire and the tanks shelling which make Assad’s forces think that anything on the ground will be destroyed. We have seen the tanks massacres in northern Hama countryside and southern Aleppo countryside with the start of the Russian assault. I was present in both massacres and destroyed at that time many targets.

Do you have any experience of regime ATGM use? Any comments on this? Also for the YPG?

Assad’s forces use the Russian arms, Kornet, Konkurs, and to a lesser extent, Metis. PKK militias are US-supported so they use TOW but they lack skilful gunners, unlike the FSA.

In the areas of Idlib and North Aleppo, how is the ATGM supply? Is there still plenty, and what is their usual source?

FSA and the military factions are still supported with ATGMs. Thanks God, there are gunners with bases and missiles all along the frontlines.

How do you see the future situation in these areas? Do you think there is further conflicts to come against the regime or the YPG?

I see that the area is going to a war, but I don’t know when. By Allah’s willing, for me and my comrades, we are ready anytime and anywhere and prepared to repel any military assault by Assad or PKK militias.

Do you assist with training others in use of TOW or other ATGM?

Of course, I help with training whoever wants using ATGM of my comrades, whether in the battlefield or in special training centers in FSA camps.

It is fascinating to be able to speak to possibly one of the most experienced (and famous) ATGM operators alive today, and I hope that this interview is of interest to my readers. I also hope that a follow-up interview is able to be completed, in which further questions about co-ordination of ATGM use, tank survivablity, ATGM ranges and more may be answered.

My thanks to عبيدة عامر @ObaydahAmer for his exceptional assistance that enabled this inteview. All sentiments expressed are the opinion of the interviewee, not the author.

If you enjoyed this interview, please consider putting a few dollars, pounds or your local currency in my direction via ko-fi.com/CalibreObscura

Any donations that reference this interview will go to Internally Displaced Persons (refugees) who are facing a harsh winter.

Thermal and Night vision optics have been a factor in combat in Syria for years, but ever since the Winter 2019-Spring 2020 fighting which saw opposition factions lose large quantities of territory, the ability to fight at night (or lack of) has come into sharp relief for factions there, in

I have covered the weaponry and capabilities of the Islamic State's Wilayah West Africa in extensive detail throughout this series of article. This has consisted of pieces regarding the arsenal of ISWA in 2018 [https://www.calibreobscura.com/the-weaponary-of-is-west-africa-boko-haram/] and 2019 [https://www.calibreobscura.com/the-weaponary-of-is-west-africa-boko-haram/], (in I which predicted 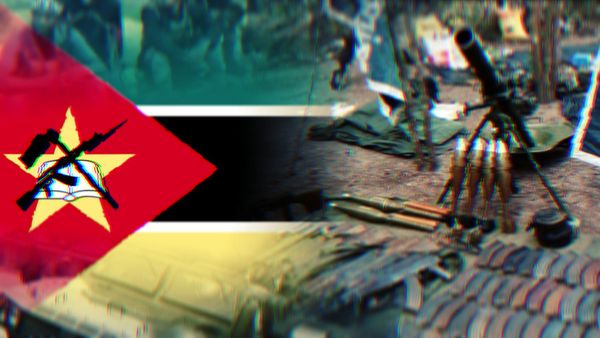 The presence of the Islamic state in Mozambique is something that is widely discussed and almost as widely denied [https://www.bbc.co.uk/news/world-africa-56773012] until recently. However at this stage, following the devastating onslaught of ISIS "Central Africa Province" on multiple towns including that of Mocímboa da Praia